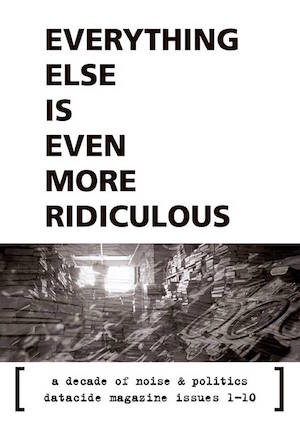 A major project in the works for quite some time, this is a complete reprint of the issues 1-10 of datacide, which originally appeared from 1997-2008. Titled “EVERYTHING ELSE IS EVEN MORE RIDICULOUS”, the 364 page volume collects unique material, most of which has been out of print for many years, charting a one-of-a-kind history of the counter-cultures associated with electronic music and free festivals.
“The free space of the party met the free space of the page and then you got a dynamism that encouraged expression and perversions and tangents because the covers held it together as a nomadic movement and you were convinced that music had catalysed it all and that music was somehow inherently political as it sidestepped rhetoric and dogma, and absented us from control addicts and the free space of the page was a kind of historic party, a kind of invisible college, a launching pad for driftage.” Flint Michigan

Followed by the complete and re-edited Datacide issues #1-10.